Since at least the 1920s and likely much earlier, collectors of early Kentucky antiques have loved the work of the state’s early silversmiths.  Kentucky silver is beautiful and less perplexing than furniture. Kentucky furniture, with some exceptions, is often mute–pieces can’t be tied to specific cabinetmakers. Silver, though, was typically marked by its maker.

That said, though, I’ve always wondered how much Kentucky silver was truly made in Kentucky. Certainly most of it came out of workshops in the state. For pieces bearing the marks of Kentucky jewelers, though, the situation can be less clear. Often they were retailing the work of others, some of it produced locally, no doubt. Some, though, came from other places. Here are a few examples from the Speed Art Museum’s collection: 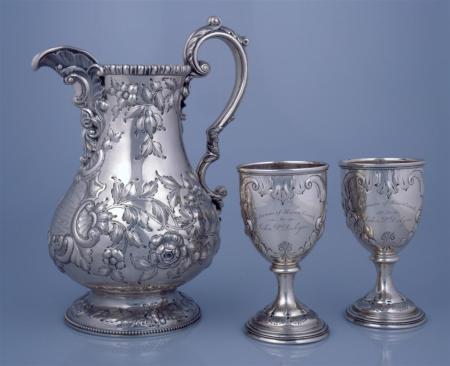 The pitcher and goblets, among my favorite examples of “sort of” Kentucky silver, were presented around 1850 to John Dobyns by “the farmers of Mason County.” Dobyns was a prominent merchant and entrepreneur. Both the pitcher and goblets bear the mark “E. & D. KINSEY” for Edward and David Kinsey of Cincinnati.

The Kinsey brothers wholesaled a great deal of silver in Kentucky through retailers in the state, so one isn’t surprised to see their mark on a piece associated with Kentucky. But the story here is more complicated. The pitcher is identical to one retailed around the same time by Tiffany and Company in New York City and was no doubt made in New York City. So here we have “sort of” Kentucky silver times two: made in New York City, acquired wholesale by the Kinseys, marked by them, and presented to a Kentuckian. 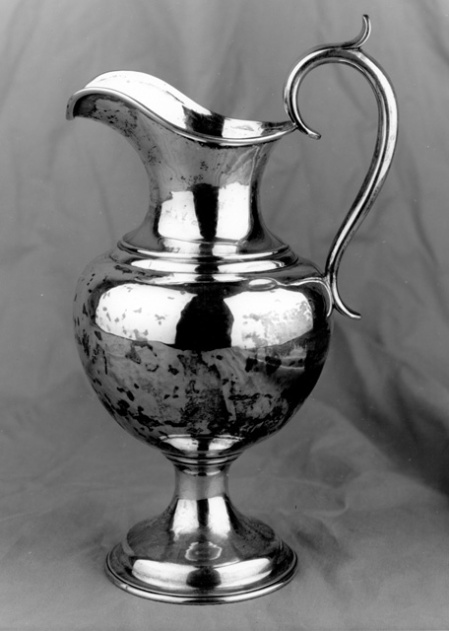 Pitcher marked by Akin and Krider

This pitcher, presented as an agricultural fair premium (prize) in 1859, bears the mark of John Akin, a jeweler who operated in Danville in Boyle County, Kentucky. Many of the hollowware pieces with Akin’s mark, though, also bear the mark of Peter Krider, a Philadelphia silversmith whose firm produced silver in fairly substantial quantities. Philadelphia merchants had strong business ties to Kentucky. The Lexington silversmith Asa Blanchard, for example, traded with Hildeburn and Woolworth in Philadelphia. 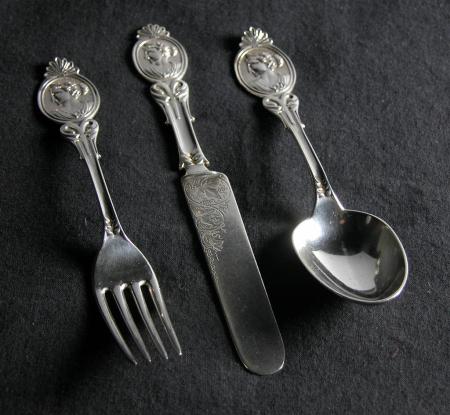 Dessert service marked Wood and Hughes and Kitts and Werne

I’ll end with a set of flatware acquired in 2009. It’s a dessert service made by Wood and Hughes of New York City around 1865 but retailed by Kitts and Werne of Louisville. Census records list John Kitts as a watchmaker and Joseph Werne as a jeweler. (This was one of many partnerships Kitts formed during his career.)

Here are the markings on the knife blade:

So are there less obvious examples out there of silver made elsewhere but marked and retailed in Kentucky during the nineteenth century? No doubt, pointing out the need for more research not just on individual artisans, but on the broader trade in silver. Get to work!

This entry was posted on Friday, August 6th, 2010 at 4:15 pm and is filed under Kentucky silver. You can follow any responses to this entry through the RSS 2.0 feed. You can leave a response, or trackback from your own site.

3 Responses to Kentucky Silver…Sort of