Paul Sawyier remains one of the most popular artists in the Commonwealth, although his work is relatively unknown outside of the region.

Perhaps this might change a bit with the recent addition to KOAR of more than 120 images from the Kentucky Historical Society’s collection of his works, including many of the impressionistic landscapes of Franklin County and nearby surroundings which have long been local favorites. Painting these mainly in watercolors, Sawyier sensitively captured ephemeral lighting effects and subtle color contrasts in his idyllic Kentucky scenes.

During his final years, however, Sawyier lived and worked in New York City and the Catskill Mountains. It is here that he began painting primarily in oils and produced what many consider his most mature work. While living with his sister in Brooklyn, he painted views of the many parks and waterways in the area. After moving to the Catskills, he concentrated on the mountains and neighboring villages. But he also worked from photographs of the old familiar settings in his home state, sending these paintings back to the faithful Kentucky patrons who had commissioned them. 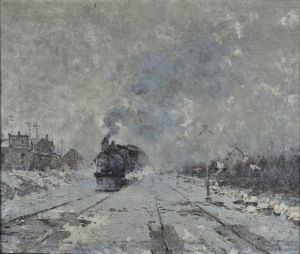 Railroad in the Catskills

The Sawyier family home in Frankfort was located where the Thomas D. Clark Center for Kentucky History on the KHS campus now stands, with a historical marker honoring Paul Sawyier near its main entrance. Several of his paintings are being rotated through the KHS Great Revivals exhibition at the Old State Capitol if you would like to see them in person. (Images from Great Revivals are also in KOAR.)

And you can read more about Paul Sawyier in two exhibition catalogues on the KOAR Publications page, which has been expanded by the addition of more than sixty-five items.  First, click on this link: http://www.koar.org/publications.htm
Then select Individual Artists and Makers at the top of the page. Works are chronologically arranged by publication date. Scrolling down, you can find the catalogue for a 1940 exhibition at The Speed Art Museum, Paintings by Paul Sawyier, and Willard Rouse Jillson’s Paul Sawyier and His Paintings, which contains a more detailed account of the artist’s life and works written to accompany the 1965 centenary exhibition commemorating Sawyier’s birth.