New images recently added to KOAR from the Filson Historical Society include portraits that relate to two blogs posted here earlier this year. 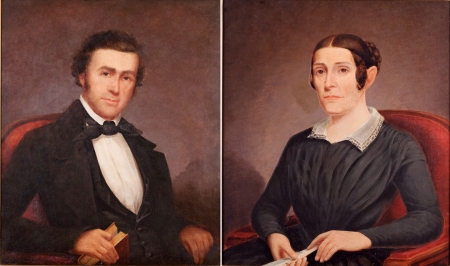 .
The life and work of William Kendrick (1810-1880), one of the first jewelers in the Louisville area, is part of “Bottoms Up!” which was posted on April 30, 2013, and can be directly linked at: https://kentuckyonlinearts.wordpress.com/2013/04/30/bottoms-up/ William met Maria Stroup Schwing (1814-1885), daughter of Louisville goldsmith and jeweler John Godfried Schwing, at a party when she was nine years old and he was approaching fifteen. They married seven years later on January 19, 1832, and had nine children. By the time of William’s death in 1880, he had become one of Louisville’s most prosperous and respected merchants. Their son William Carnes Kendrick (1852-after 1930) wrote Reminiscences of Old Louisville, a lengthy typescript account of the city that includes references to many local businesses and business owners, starting with a “Memoir to My Father, William Kendrick” and ending with the catastrophic “Recent Flood” that left Louisville under several feet of water for many weeks. It can be found at: https://speedweb.speedmuseum.org/pdfs/kendrick.pdf
This, along with many other publications, can also be found through the KOAR website at: http://www.koar.org/publications.htm

Carl’s most iconic paintings are detailed landscapes of his favorite haunts: scenes from what is now Cherokee Park and along River Road in Louisville, Pewee Valley in Oldham County, and the hills just across the river in New Albany, Indiana. His favorite subject was beech trees. Brenner married Anna Glass (1843-1936), daughter of an eminent Louisville violinist, in 1864 and they had six children. Three sons inherited his artistic talent; Edward became an architect and Proctor Knott (named after Carl’s close friend, Kentucky governor James Proctor Knott) studied art before taking holy orders at St. Meinrad Abbey in Indiana. Carolus (1865-1924), who painted this portrait of his father, studied art in Germany and France before settling in Chicago. Several works by Carolus are also in KOAR and the Filson Historical Society has photographs taken by both Carolus and his brother Edward in its special collections. A catalogue of the J.B. Speed Memorial Museum’s 1947 exhibition “Kentucky Paintings by Carl Christian Brenner” can be found at: https://speedweb.speedmuseum.org/pdfs/brenner.pdf

The Filson Historical Society was founded in 1884 in Louisville, Kentucky. Named to honor Kentucky’s first historian, John Filson, it is the commonwealth’s oldest privately supported historical society. Their website is: http://filsonhistorical.org

This entry was posted on Monday, September 30th, 2013 at 10:52 pm and is filed under Kentucky art, Kentucky paintings. You can follow any responses to this entry through the RSS 2.0 feed. You can leave a response, or trackback from your own site.